Historically, most of the support for Our Lady's Pantry has come from individuals and groups in the same neighborhoods that the Pantry serves.  Individuals in Balm, Wimauma, and Sun City Center continue to generously support our work.  Gifts of time, talent, and treasure, however, are increasingly coming from beyond these neighborhoods.

The Rockwell Group Foundation volunteers on the Eve of Thanksgiving -- 2018

Recently, for example, the Rockwell Group Foundation contributed not just 200 boxes of turkey dinners for our families, but a team of workers to help distribute their meals.

According to Brianna Morffi, secretary at Rockwell, who led her team at the Pantry on the day before Thanksgiving — November 21 — the idea for this donation came from Doug Zoellner and Waylon Morris.  Zoellner and Morris are owners of Rockwell Building Systems, a construction company in Riverview, Fl., and founders of the Rockwell Group Foundation

“They wanted to ensure that families, who could not afford a Thanksgiving dinner, were still able to celebrate the holiday with their families,” says Morffi.

“I was very surprised with Rockwell's offer,” says Tom Bullaro, co-director of Our Lady's Pantry with his wife Anita.  “When Brianna said they would be bringing 200 complete Thanksgiving dinners — each dinner for a family of eight — it was almost something I couldn't believe.

"No one ever offered to do anything for us like this before.  I'm not sure I really believed it until two weeks later, when Brianna called back to make final arrangements for the donation.” 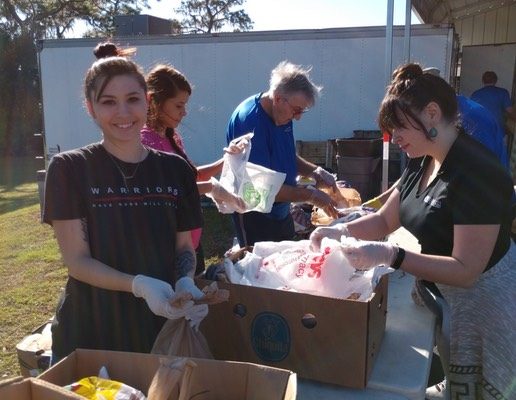 The Rockwell team not only donated 200 turkey dinners — but they helped to distribute them as well.

Morffi says their team purchased 200 pre-packaged Thanksgiving Day meals from Publix that cost $49.99 each.  This donation cost Rockwell a stunning $9,998 — monies that came from countless individuals as well as corporate contributions.

“Our thanks to Rockwell, and all the other groups and individuals, who helped make Thanksgiving special for so many,” says Bullaro.  “We gave away more than 500 turkeys in all!

“And thanks to our helpers, too — our regular volunteers, as well as all the Rockwell folks, who worked alongside of us, packing boxes for our families, unpacking our truck, then stocking our refrigerator, freezer, and shelves.

“We could not have done this work without all of you.” 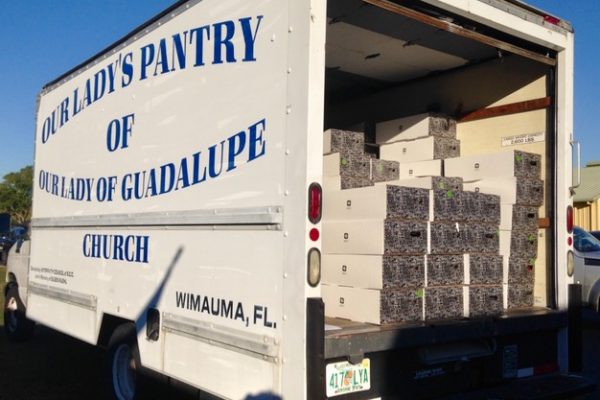 Rockwell volunteers arrived early with 200 boxes of turkey dinners — each dinner for a family of eight — from Publix. Thank you, Rockwell!!!